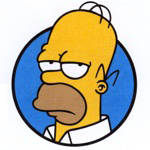 I did what I could! I did what any loving husband would do! I reached out to some violent mobsters.

Oh, God gets your prayers, but he just clicks delete without reading them - like e-mail updates from Linked In!

Or what? You'll release the dogs? Or the bees? Or the dogs with bees in their mouth and when they bark they shoot bees at you?

That's a problem for future Homer. Man, I don't envy that guy!

I know what you're saying, Bart. When I was young, I wanted an electric football machine more than anything else in the world, and my parents bought it for me, and it was the happiest day of my life. Well, goodnight!

Apu, you got any Skittle Brau? Never mind, just give me some Duff and a pack of Skittles.

Now what is a wedding? Well, Webster's dictionary describes a wedding as the process of removing weeds from one's garden.

Now, Marge, don't discourage the boy. Weaseling out of things is what separates us from the animals. Except the weasel.

You can't go wrong with cocktail weenies. They look as good as they taste. And they come in this delicious red sauce. It looks like ketchup, it tastes like ketchup, but brother, it ain't ketchup!

How could you? Haven't you learned anything from that guy who gives those sermons at church? Captain What's His Name? We live in a society of laws! Why do you think I took you to all those "Police Academy" movies? For fun? Well, I didn't hear anybody laughing - did you? Except at that guy who made sound effects. Where was I? Oh yeah, stay out of my booze.

I saw this movie about a bus that had to SPEED around a city, keeping its SPEED over fifty, and if its SPEED dropped, it would explode! I think it was called "The Bus That Couldn't Slow Down."

I'm normally not a praying man, but if you're up there, please save me, Superman!

When will I learn? The answers to life's problems aren't at the bottom of a bottle - they're on TV!

Marge, you being a cop makes you the man - which makes me the woman; and I have no interest in that, besides occasionally wearing the underwear, which (as we discussed) is strictly a comfort thing.

Whenever Marge turns on one of her "non-violent" programs, I take a walk. I go to a bar, I pound a few, then I stumble home in the mood for love...

Marge! Get my seal club! The BIG one!

When I first heard that Marge was joining the police academy, I thought it would be fun and zany, you know like that movie... "Spaceballs". But instead it was dark and disturbing, like that movie "Police Academy".

Honey, I'm NOT cool. I was never cool. I didn't go to college. Every CD I have, I bought at a car wash. Black and white films make me angry. I can't pronounce "artisanal". I only know David Cross from the Chipmunks movie. Not only do I like Van Halen, but I think they keep getting better!